Cyclists taking part in the Brighton2Brussels Charity Cycle Ride in aid of the Mayor’s Charities will attempt a new record by cycling the first mile of their journey in the sky.

Last year, HOP Engineers, Will and Cenk, raised over £800 collectively for the Mayor’s Charities when they cycled from Brighton2Paris.

This year’s charity bike ride will start at The British Airways i360 on May 3, with the 40 riders cycling a mile around the inside of the pod as it glides up to 450ft and back again. The participants will then continue their ride on to Brussels.

Several cyclists from the Brighton and Hove Property Consortium (BAHPC) who are taking part in this year’s ride tested the pod cycle on Monday February 19.

British Airways i360 was conceived and designed by Marks Barfield Architects, creators of the London Eye. Executive director Steve Bax said: “The test ride went brilliantly and we’re all excited about welcoming the full team of cyclists onto the British Airways i360 pod on May 3 and to seeing them off to Brussels in style!”

BAHPC founder and cycle ride organiser Colin Brace is hoping the mile in the sky will set a new record with Guinness World Records or a similar organisation.

He said: “I am thrilled that we have developed such a close working relationship with British Airways i360 and we are very grateful for their support.  This will be the first stage of our four-day cycling event and our aim is to raise over £50,000 to help support the most vulnerable residents of our city. There’s still time to sponsor us, or even to sign up, saddle up and join in!”

Please click the link below to help Will from HOP Consulting raise his contribution of £750 towards the team’s fundraising goal! 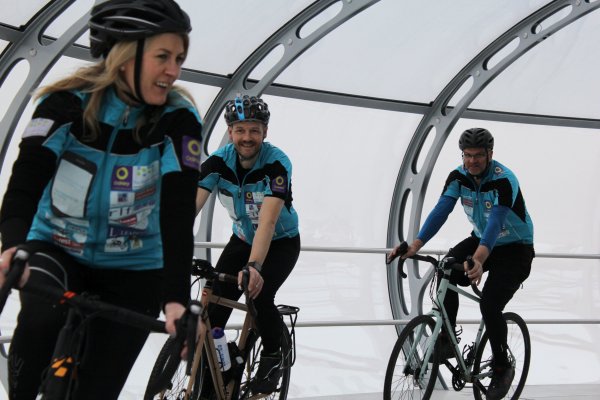