On the 26th February, the ‘Hove Plinth’ Project Team were featured on BBC’s South East News to celebrate the start of construction! This plinth will showcase a new local sculpture every 12-18 months on Brighton Seafront. Work will take place on the site over the next eight weeks with support from HOP and a number of local firms who are contributing work free of charge, including Matsim, Millimetre and RLF. 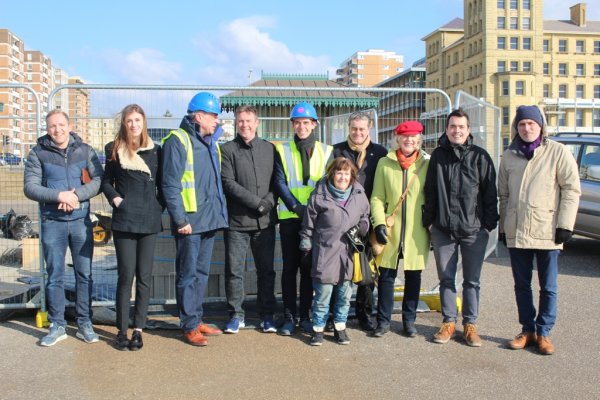 Jon Orrell spoke with the BBC about the complexities of the project. Mainly that the plinth is designed to hold any sculpture the mind can create! Obviously, we had load and dimension constraints, being a 3x3m grid with a maximum load of 110kN, which is approximately 11 tonnes, roughly 2 African Elephants or a standard double-decker bus!
Another complexity is the location being on the Hove promenade, with pretty consistent wind. Therefore our loads, with potential eccentricities in loading and the additional wind loading required, have made for a very interesting design!

The official Hove Plinth Launch Event will take place at 2pm on 21st April where the plinth and it’s inaugural sculpture ‘Constellation’ by Jonathan Wright will be officially unveiled by the Mayor of Brighton. It’ll be a fun event with speeches from the people involved, live music and a few special treats.