HOP love the challenge of working with artists and crafts people to turn ideas and dreams into reality; creating something different and bespoke.

Many of our engineers have come from either site backgrounds or had training in creative subjects. Consequently, there is a strong thread of artistic design in HOP’s work. Putting art into engineering has led us to assist artists with engineering their art. This has ranged from foundations for sculptures through to more daring pieces.

Please contact HOP Engineer, Cenk Nuttall for enquiries or advice on art installations, event installations and other Art & Engineering projects. Email: cenkn@hop.uk.com or call us on: 01273 223900.

HOP have worked with Brighton Artist, Bruce Williams, on the installation of various public sculptures over the years.

‘Springline III’ Havant Park Railings were inspired by the shape and movement of the local spring waters. The railings were laser cut, galvanised and powder coated, measuring a total of 30m in length. Many external sculptures like this need to be correctly sized to withstand normal loads while in use by the public. They also require detailing and finishing to inhibit corrosion. With these handrails, we converted the Artist’s idea into reality by sizing members and preparing structural details for the steel fabricator.

HOP were also approached to assist in the creation of a number of artworks as part of the Finberry Housing Estate near Ashford in Kent. Five laser cut geese were to be positioned flying above the treeline on the approach to the new housing development.  However, with the geese being 4m long and 3m high, this required a concentrated design process between Artist and Engineer to get the geese soaring into the air. HOP designed the sub frames on to which the laser cut geese were fixed, together with the support columns and foundations to ensure that the Geese didn’t fly away!

HOP’s offices have always been located in Hove and the majority of our colleagues live and work in the vibrant city of Brighton. As a result, we can all take pride in the local projects that we have helped realise. Not only does this include our work on many of Brighton’s famous landmarks, but also many public sculptures!

HOP have been working with the Hove Civic Society & Millimetre Architects on Hove Plinth, providing all services free of charge. Hove Plinth will showcase a new local sculpture every 12-18 months on Hove seafront, providing an exciting new cultural attraction for the local community. We prepared Civil and Structural Engineering designs, a Schedule of Works to produce a tender document, and obtained competitive prices from suitable contractors. The first sculpture ‘Constellation’ by Jonathan Wright was unveiled by the Mayor of Brighton on 21st April 2018. 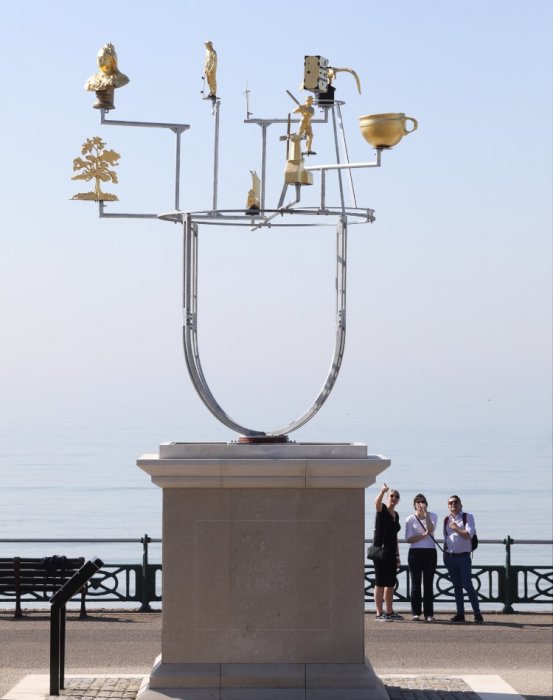 ‘Passacaglia’ sculpture on Brighton Seafront was created by Artist, Charles Hadcock. The structure was formed from modules constructed from traditional flake graphite cast iron. The original construction was found to be marginal. Cracking was reported in the most highly loaded area at the springing point of the cantilever. The casting process can be susceptible to gross internal defects such as cold joints or inclusions of sand or voids. These affect tensile strength significantly. HOP recommended recasting the failed panel in spheroidal graphite cast iron which had much better strength characteristics. In the end it was agreed to also reduce the height by one panel to maintain surface texture and colour characteristics. 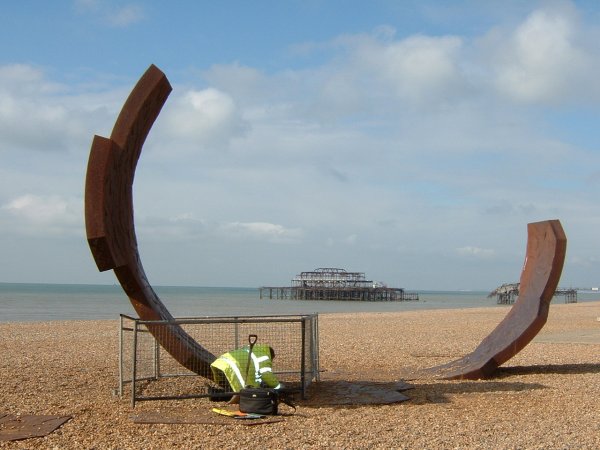 HOP has been honorary Consulting Engineer to Brighton West Pier Trust since 1992. Following HOP’s ideas, the original cast- iron columns from the West Pier have been restored for re-use as part of a new landscaping scheme, east of the British Airways i360. 24 columns now stand in a ‘Golden Spiral’ (otherwise known as the Fibonacci Spiral) on The Piazza. A plaque puts Eugenius Birch, designer of the West Pier, at the centre of the spiral. The geometric and mathematical origins of the spiral reflect the masterful design of the West Pier, now re-imagined through the ‘vertical pier’ of The British Airways i360. The spiral also symbolises the curve of the waves on the beach where the pier used to sit. 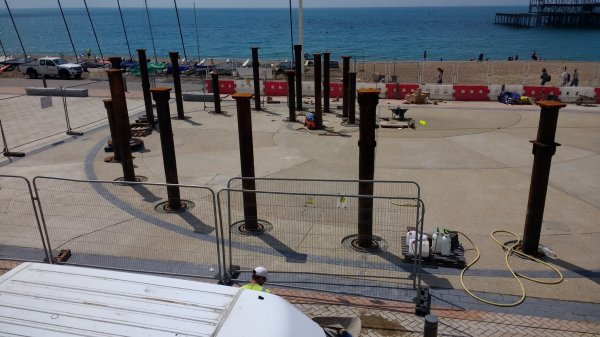 Construction of the ‘Golden Spiral’ 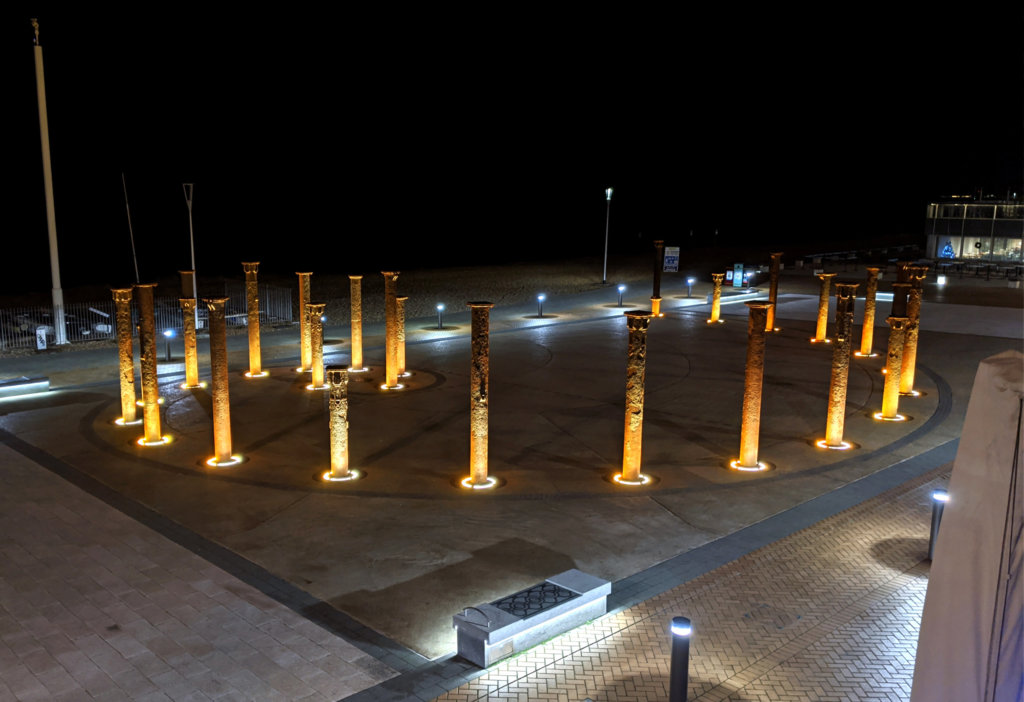 Although, HOP are well-experienced in external events and providing foundations for both permanent and temporary installations, nothing quite prepared us for the proposal presented to us by French performance art company, Generik Vapeur.  They proposed to put a 25m high man, made of shipping containers, on Brighton Seafront, which would be projected on to, but also house performers, including an aerial cyclist; the Titanic; a pterodactyl and a polar bear, accompanied by a cymbal playing penguin! This was a very popular event in the Brighton Festival of May 2011, attended by many thousands on the seafront. HOP designed the foundations, checked over the structure prior to the event and attended the show in the evening. 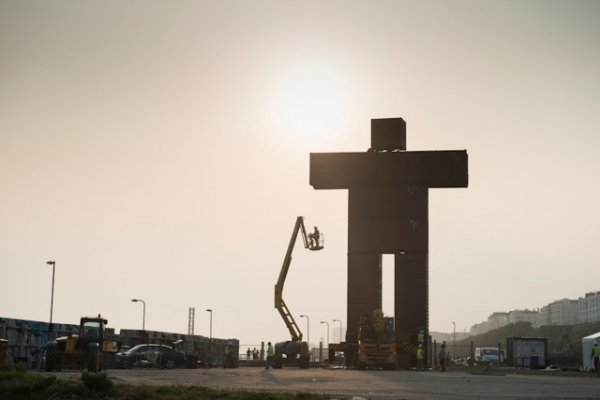 The Brighton Art Festival is one of the biggest in Europe, second to Edinburgh. HOP often gets called upon to help artists with their projects for the festival. The Compton Skyline project involved creating a work of art out of a row of terraced houses in Brighton. The artist wanted to find a way of projecting a laser light show on to and above the buildings. HOP found a material which both reflected the light and was porous. We devised a system of scaffolding support using the self-weight of the chimneys. In case of exceptionally high winds, snap ties were installed which would make the screens detach and fly away, avoiding overloading of the roofs. The project was very successful and enjoyed by all at the Brighton Festival in 2008. 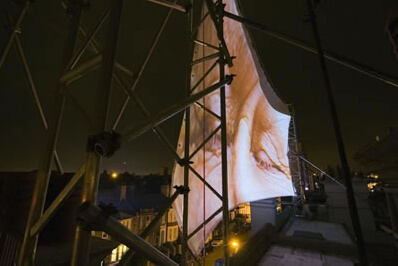 Award winning digital designer: Seb Lee-Delisle, wanted to install his interactive laser light show which would project onto the Jubilee Library in Brighton during the Brighton Digital Festival 2011. With a week to go, he was told that permission to fix to the Library structure was not forthcoming. HOP considered independent scaffolding, but there was not enough time and providing a foundation would be difficult. HOP’s work with Mobile Elevated Work Platforms (MEWPs) led us to come up with the idea of having 4 MEWPs in a row. Our sketch showing the ‘March of the MEWPs’ was approved by the Local Authority and the show could go on! Computer generated fireworks were projected onto the screen and motion sensors were placed along the bottom which were used to trigger the fireworks by up to 30 members of the public. The display was a great success!

“We need an engineered solution for a tree house in the woods, which has the appearance of not being engineered and growing out of the trees”

This initial brief sparked our interest and we were eager to take on this unique project. HOP designed the foundations for the tree houses, in a way to minimise any damage in the tree roots. Following on from this, working closely with the carpentry contractor, HOP designed raised timber platforms to form the bases for the tree houses. A series of ‘typical’ details were created that could be used around the project in order to transfer loads back into the main framing elements. This was a great collaboration between HOP and a skilled craftsman, with several details being altered and redesigned to suit the onsite requirements. 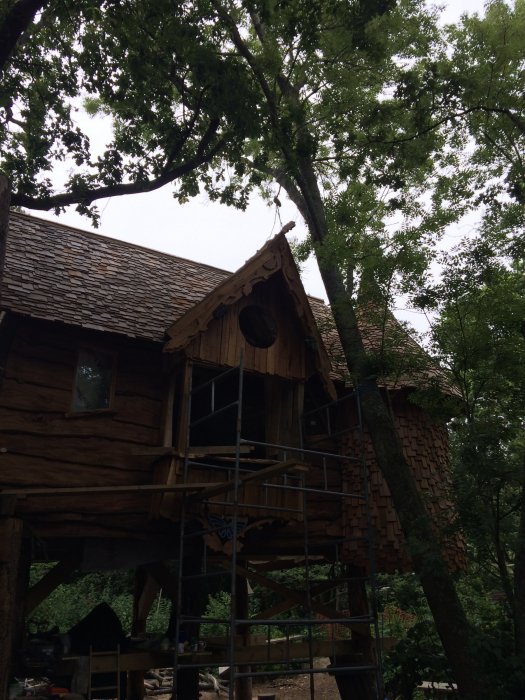